It started off with a simple browser switch. Although I have a cable internet connection, I had been experiencing exceptionally slow surfing speeds (If by any chance you are in the same boat don't blame your ISP like me, try a different browser!). My experiment was Mozilla Firebird v0.7 and it opened my eyes.

From that point onwards there was no stopping me. Placing my faith in the lords above, I attempted to install Linux on my system. Now, although I do know quite a bit about the Windows environment and have messed around with software quite a bit, being the mortal that I am, I could never bring myself to perform such a risky operation without a new Hard disk and knowledge of the fact that my data is safe. I'll bet that you are nodding and smiling right now.

Most people feel the same way, but the last straw was when XP crashed because of a video card conflict. I know it happens sometimes, but this happened when I was playing an Audio cd. Imagine my frustration when I opened up my CPU to see that the power supply fan had conked out, leading to an overheating of the motherboard. What operating system allows this? Is there an operating system out there that fails to notify you if there's a hardware malfunction and just freezes at Startup? Yup, you guessed it.

So the first comment that pops up is, "But I don't know anything about Linux!" To be honest you really don't need to. Linux, if you already didn't know it, is essentially free. You can download it in CD-ROM form or for the more hardy, in it's source code form. If you are too lazy, you can get it shipped to you for a charge (usually $3-4 and NOT $300). Now Linux was first developed by some cool fellow as a desktop variant of UNIX (which is another super cool operating system, generally used by big companies and is very good for networks), and he made his code (UNIX, Linux are written in C++ which is a programming language, very powerful and very old) available to anyone who cared to improve on it. People with too much time on their hands did so, and the Linux community was born. Enough of the history, basically Linux has advanced to a point where it's equal, if not better than most operating systems out there.

Now a lot of people modified the original code to whatever best suited them and thus there are a lot variants of Linux out there, the most popular being Red Hat Linux, I'm sure you've come across the name sometime or the other. So I did a little bit of research, went to linux.org, checked out the various distributions out there, had a look at their support sites and then proceeded to install College Linux v2.5. Installing is fairly straightforward, the manuals are huge, but that's because they take into consideration, all possible types of hardware and choices that you have, unlike some other operating systems that we know very well. Once you download the Iso's and burn your cd's, see if you have enough hard disk space, you are ready to go! Most installs these days are interactive and offer advice as to how to go about the installation. 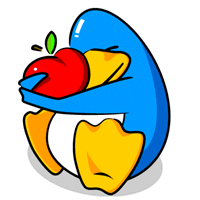 May the source be with you!

Well the install went well but College Linux was no fun, it did not detect my sound card or my video card, my mouse wheel wasn't working and it wouldn't recognize any of the other hard drives. I did get a lot of help from the support forums but there's only so much that they could do. So after browsing through a lot of help forums and manufacturer's web sites, I decided to install a more popular Linux distribution. I chose Mandrake v9.2 because it's supposed to be the most user friendly. It is! Everything is working great and I am officially now an open source community member.

Why should you switch to Linux?

By the way, a recommended linux install would be Mandrake v9.2 (which comes in 3 cds), generally takes 3 hours to download, 15 minutes to burn the cds and after 7 beers you have a new operating system!

Make the switch. Open source - the way it's meant to be.